After the great Gorgerail 2011 slideshows, we were able to catch three westbound trains - all grainers - before it got dark.

Amazing to think that I am posting these photos from the back of my Suburban, camped trackside at Avery!

(2) Westbound west of North Dalles, about a 1/2 mile east of the above location.

Excellent Pictures...We got those same trains at East lyle & Bingen....What a great time at Gorge Rail...I really enjoyed it this year...There were a few minor glitches, but Bye and Bye, it was a good quality show, The Food was excellent...and the ladies that served us were very fun...I really liked your sons and yours slide show...Great new perspective on the east end of the Gorge...
Sorry that I didn't get to talk to you, I was busy with all sorts of little things helping out at the show...
I hope it will be as good if not better next year...

After the great Gorgerail 2011 slideshows, we were able to catch three westbound trains - all grainers - before it got dark.

Amazing to think that I am posting these photos from the back of my Suburban, camped trackside at Avery!

(2) Westbound west of North Dalles, about a 1/2 mile east of the above location.

(3) Westbound at Horsethief Lake in fading light.
Click to expand...

Nice stuff Rob. Especially of #3. I would love to go there someday.

The sun was a bit more uncooperative as I was with N.P.-dad west of North Dalles.. Shots of the grainers are so-so...

Thanks for joining us.

Well, we did it again. We had a nice crowd considering the competition for railfan attention up north. Comments and constructive criticism always welcome. We got lots of great feedback so next year should be even better. Thanks again to all the presenters for all their hard work without it there would be no show.
Here are a few I got during my odyssey on friday before the show. 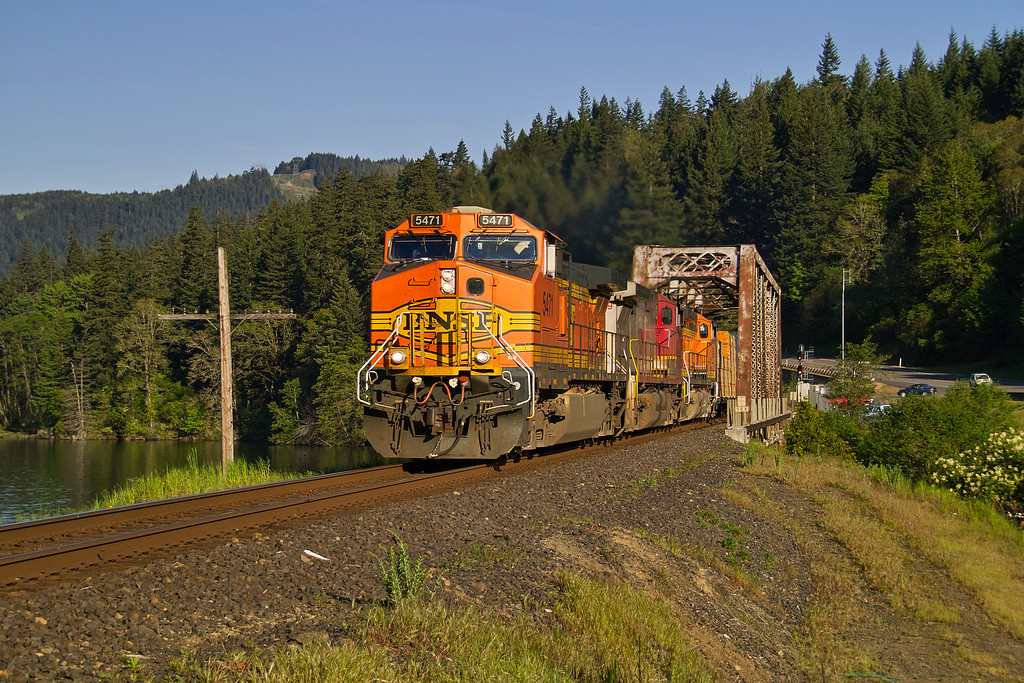 BNSF manifest at Home Valley coming off the bridge into morning sun. 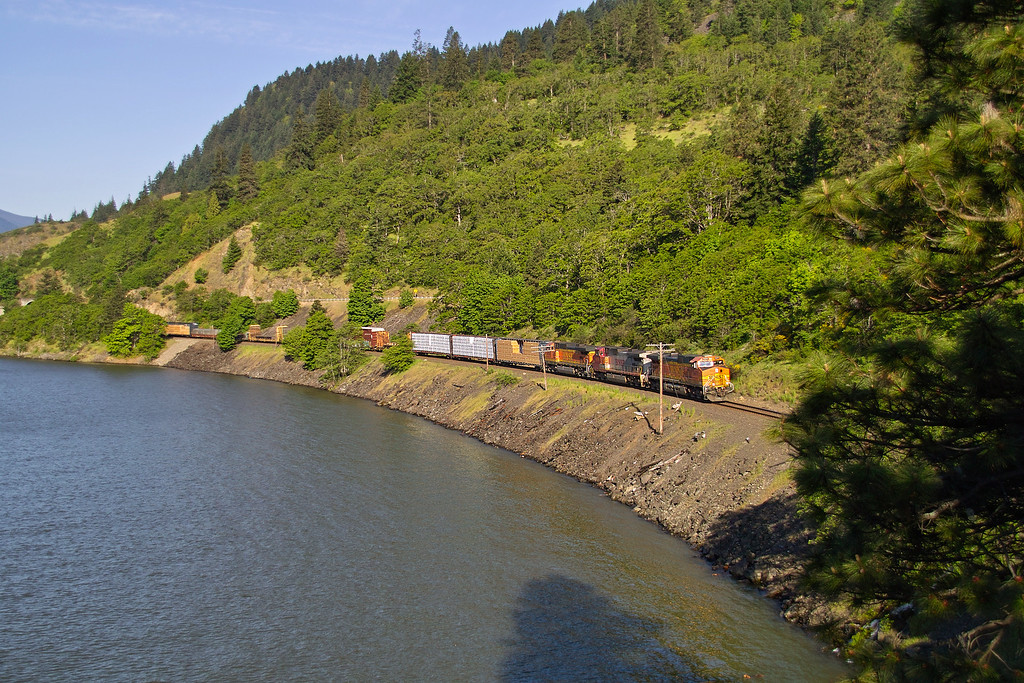 Previous train doing the reverse angle on the publicity curve. 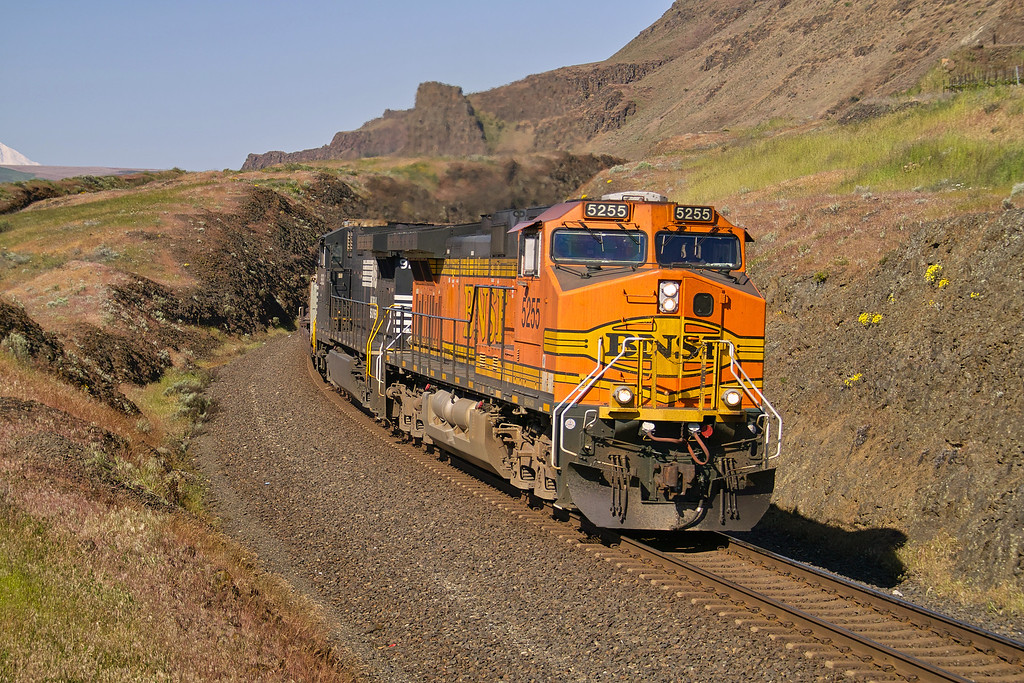 Garbage train coming out of the cut at Maryhill. 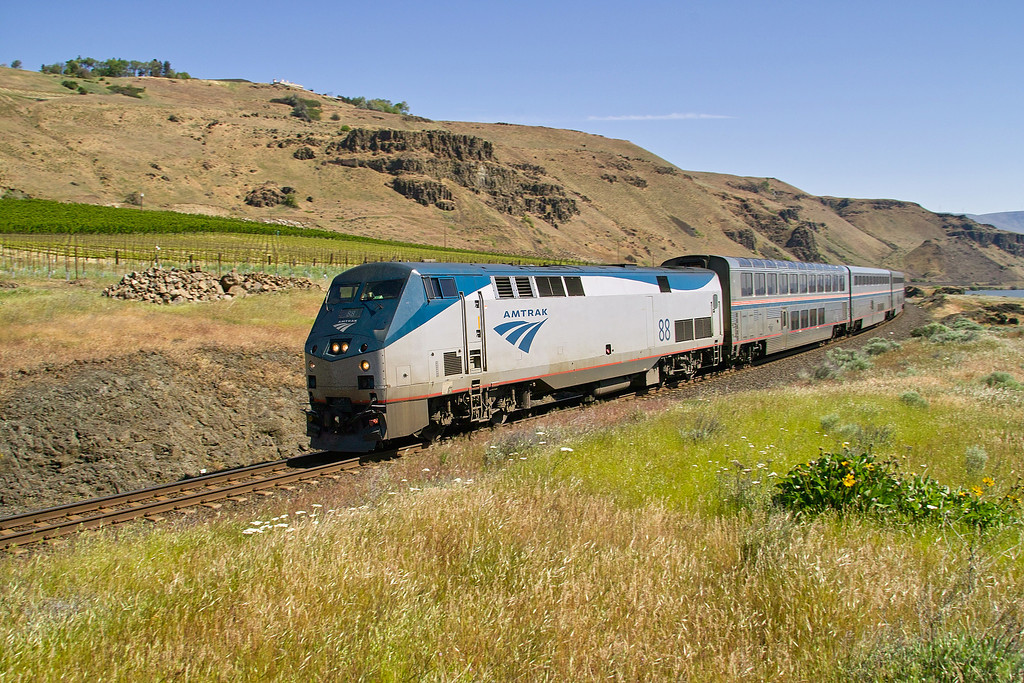 Portland section of the Empire Builder running over 2 hours late at Maryhill. 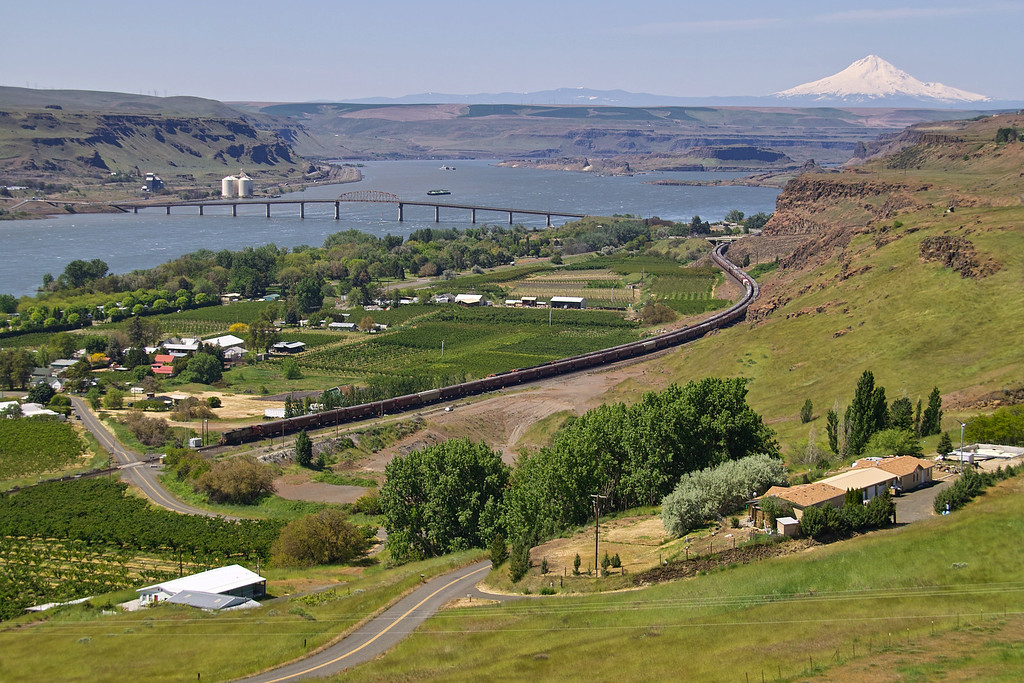 Empty and loaded grain trains squeeze past each other at the Maryhill siding seen from the Sonehenge Monument. 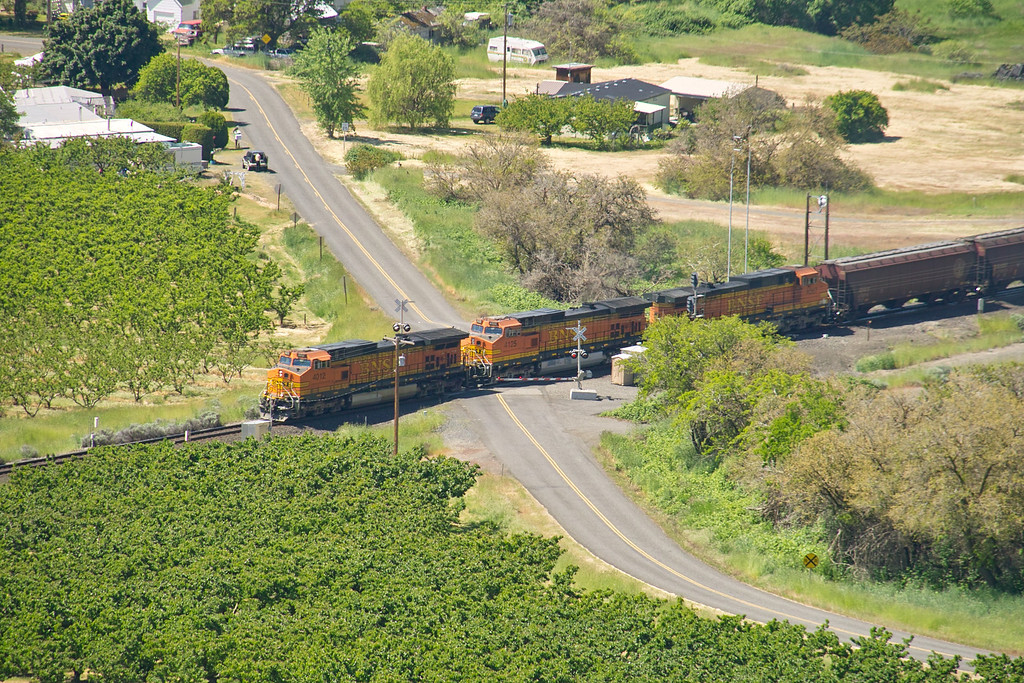 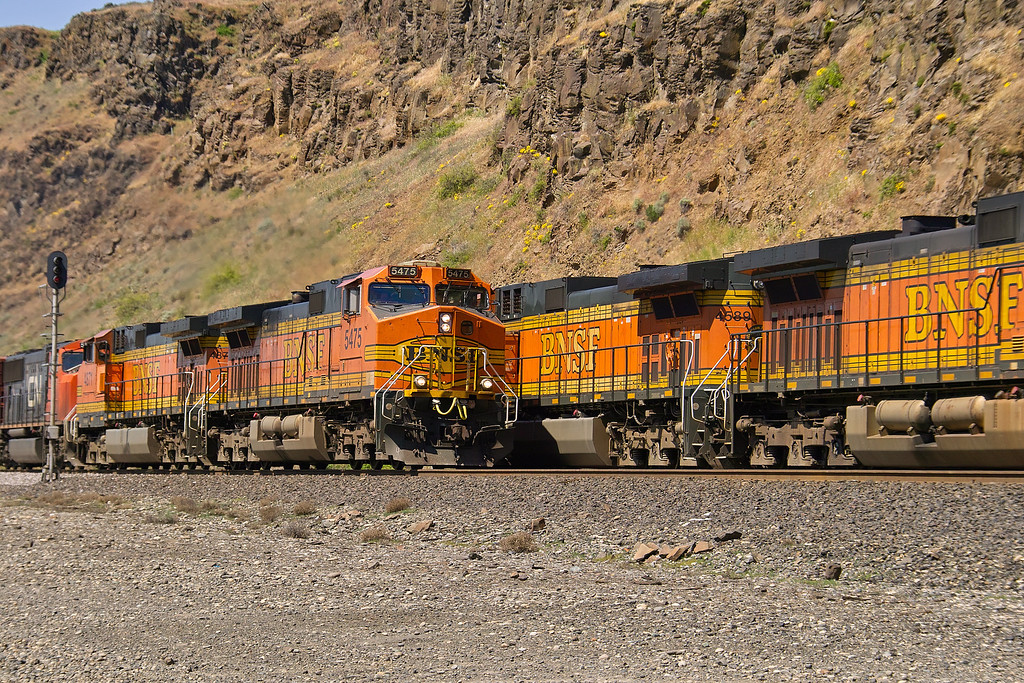 Another meet at the West Maryhill switch. 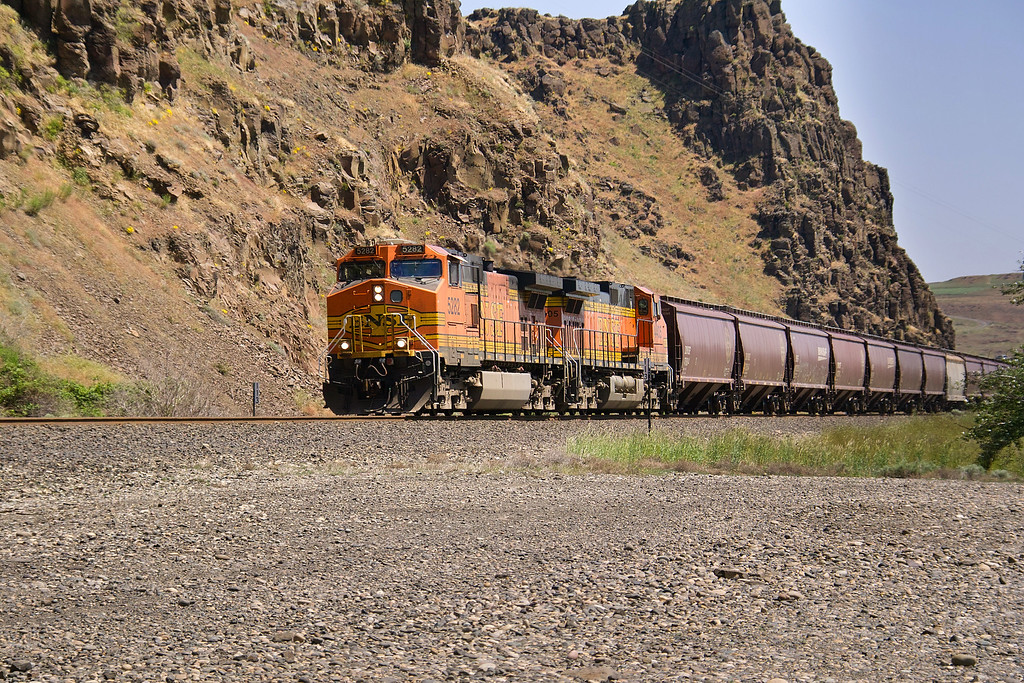 Loaded Grainer slips through Maryhill, I was shooting these out the window while preparing the transition slides for the show. 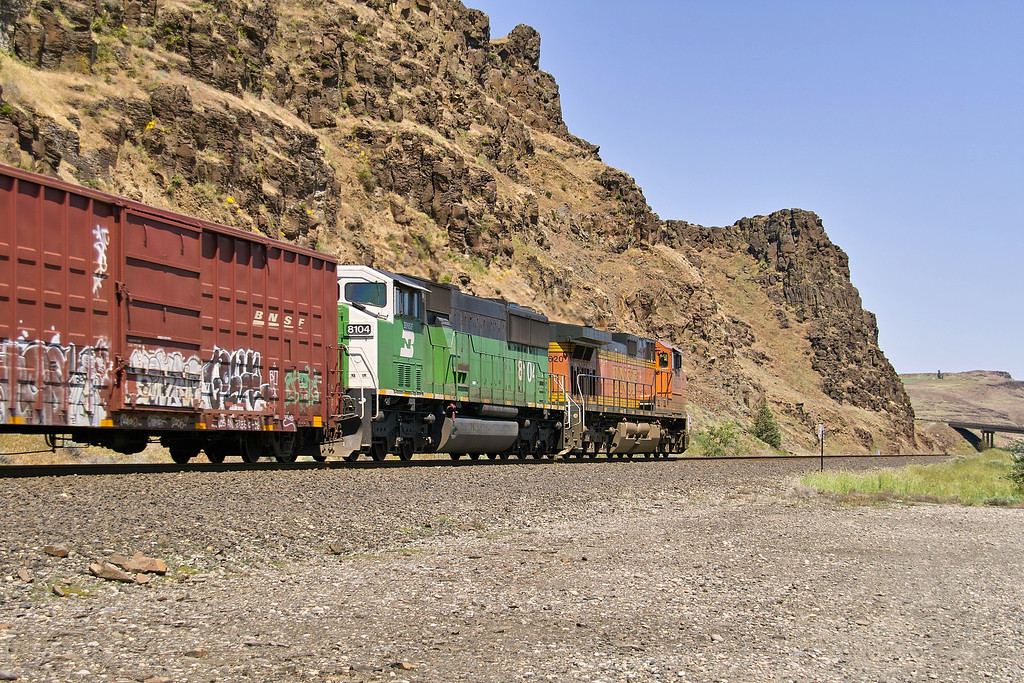 Most interesting power of the day heads east in the trailing position again at West Maryhill. 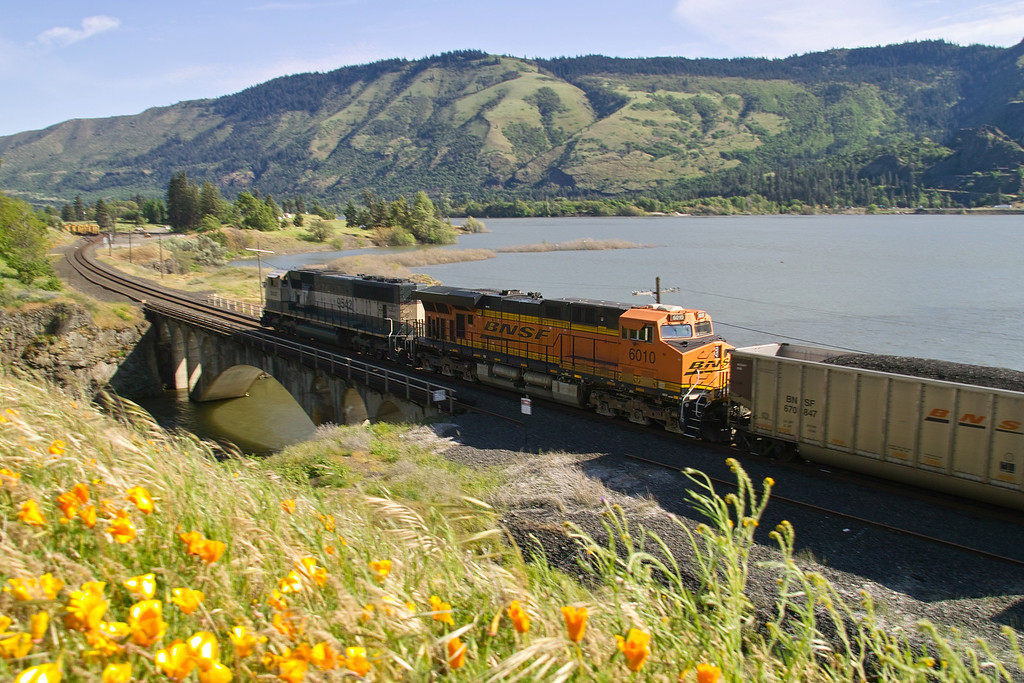 What do you do when your camera locks? Reset and shoot the DPUs! 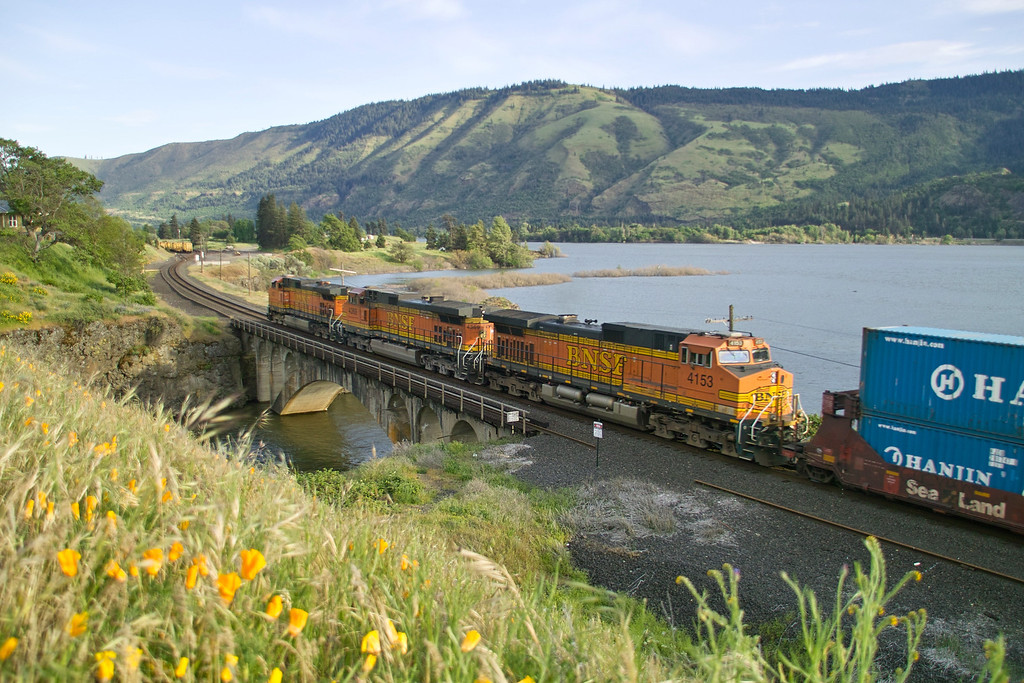 Eastbound stack train crawls past Lyle at 30mph hoping to make it to Wishram to swap out his failed EOT device. 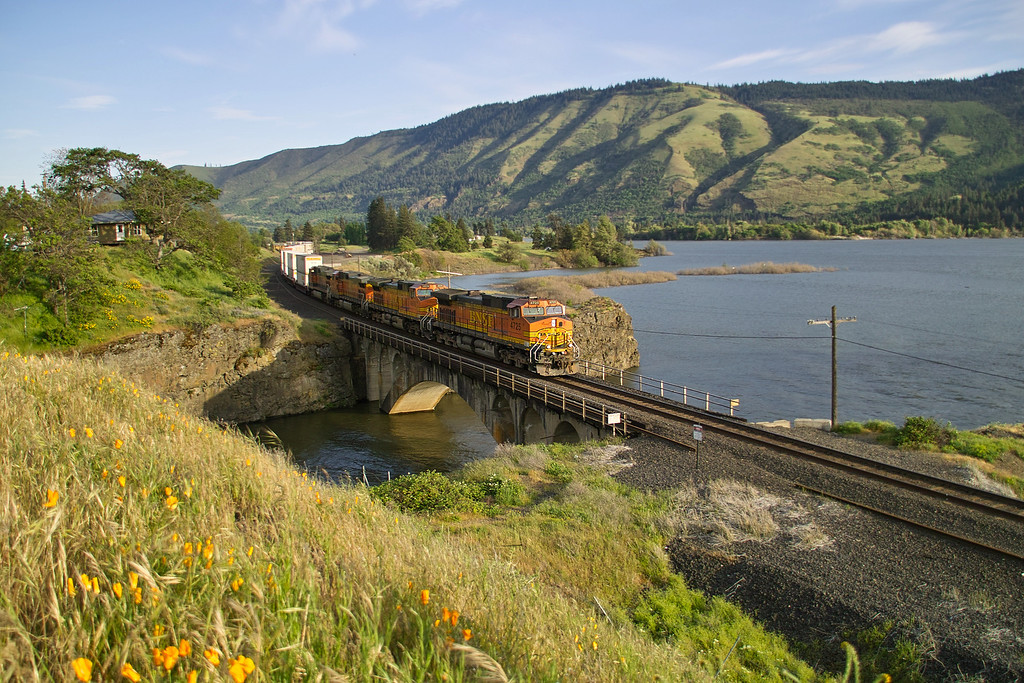 Finally the shot I was waiting for of the Z train heading into the sun with the poppies at Lyle. The bummer was they closed up when a cloud came over earlier.
Anyway it was a great day, a great event and look forward to doing some more.
Thanks to Aaron for starting it all!
Paul
C

I think the return of Gorgerail is something to behold. What an amazing event. This is my fourth Gorgerail event I attended. I would like to thank the following people without there help and understanding this event would not have come back.

Paul Petersen,Steve Eshom,Gary Durr,Charles Bonneville. Dale Skyllingstad. Thanks to David Lange for putting together the Program for the show. I really want to thank Paul Petersen for giving me a good kick in the Ass, to help organize this event. Aaron Hockley for his vision for starting this. Dale Skliingstad and Charles Bonneville for the work that they did, on keeping the shows going. Gary Durr and Steve Eshom, Paul Petersen, who with there creative eyes, Helped us see how things can be real and innovative and fun. Shawn Heller for helping with registration and door ticket sales.

With that said, I will now give my Gorgerail report.

I was very excited to be involved with Gorgerail 2011. I love rail travel and taking the train is great. But I have learned in the past, to get to the better land or as I call it, the best place to railfan in the west(pacific Northwest) You fly. Fatal mistake on my part.

The following is real and it did happen. I call this the ill fated trip of Amtrak train number 14 Coast Starlight.

Like any other ready to go railfan. I am all ready for gorge rail. I get to the San Jose Amtrak station for my 8:39PM Departure on May 19,2011. As I am checking in for my train, the ticket agent(Karen) Informs me that 14, hit a tractor and trailer, in King City two hour delay. Ok I can live with this. So as the night progresses, The Starlight begins to fall down even more. Train number 14, the Coast Starlight arrives into San Jose California at 3:00AM. Today our lead unit is the Amtrak 167 the front of the engine is just trashed. Not only did they hit a big rig, but it had a John Deere Tractor on it. You ask me how I know. Some of the passengers on the train took pictures of it after the collision. Just split it right down the middle. We limp into Oakland around 4:30 am with a UP GP. I hear our conductor say we will be changing units out in Oakland. Needless to the Conductors surprise and my suprise. we where given the UP 4119(SD 70M) For our power change. So Amtrak 14 has the UP 4119 on the point and Amtrak 167 and Amtrak 505. The 505 is dead in consist, due to Mechanical forces unable to get unit back online, after new Positive train speration module being installed. We get to Sacramento at 7AM on May 20,2011. We are now officially seven hours late. After arriving into Sacramento we find out that the Amtrak 167 does not want to provide head end power and or operate. UP LMS(Locomotive Services) comes from Roseville and Amtrak Mechanical is on the scene with Amtrak supervisor and Road foreman of engines. Now back to Amtrak 167, From the accident when hitting the truck, the feed water radiator hose and valve was damaged. Water came flowing like a water fall out of the unit. Amtrak Mechanical and Sacramento fire department off duty fireman(riding the train) used a fire hose into the engine so it would not shut down and kept head end power going. The part is found and it takes an additional five hours to arrive. So in reality Amtrak number 14, did not leave Sacramento until 3PM on May 20,2011. So if I stayed with the train, I would never be able to attend Gorgerail. So my dear sweet mother calls me, about three minutes before the crew shuts the doors and attempts to depart for Portland and she tells me, I have an airline ticket for you on Alaskan airlines to Portland. I say I will take. it. I am so glad I did that. Fourteen arrived in Portland at 7AM the next morning the Day of Gorgerail and was annulled at Union Station. One more thing I forgot to mention, as i was getting into the cab at the Sacramento train station, I hear fourteen on the scanner say they failed there running air test departing Sacramento.

Rob and paul: Those are fantastic shots, thanks for sharing those. Gorge-rail was great, i enjoyed every show. I am already looking forward to next year.

EAGLE EYE said:
Rob and paul: Those are fantastic shots, thanks for sharing those. Gorge-rail was great, i enjoyed every show. I am already looking forward to next year.

We stayed in the Gorge until 3:00pm Monday. Monday didn't pan out too well, but Sunday was awesome despite the cruddy weather.

I jinxed myself with the trackside postings Saturday night, my laptop died Sunday morning (wouldn't even make it to the power-on self-test!).

Austin & I unfortunately were in the car as soon as the "official" slide shows ended, he was starving, and I think he REALLY wanted to get track side.