Ferromex on the BNSF

During my recent trip from Calgary to Great Falls, Montana, I spotted Ferromex 4648 running behind BNSF 4902 at Sweetgrass, Montana. Is this common to find Ferromex power running with BNSF? Thanks. I have attached a couple of images of 4902 and Ferromex 4648.

Very common on the BNSF in Texas and Louisiana.

setxrailfan said:
Very common on the BNSF in Texas and Louisiana.
Click to expand...

Interesting! I guess that wouldn't surprise me down in that area. But up here in the north at the Montana / Alberta border seems to be a bit far from home for this unit. Maybe it's more common than I think as this is my first time railfanning the BNSF in Montana.

Last March I spied one in the middle of the consist of a UP train on BNSF trackage in Portland, Oregon: 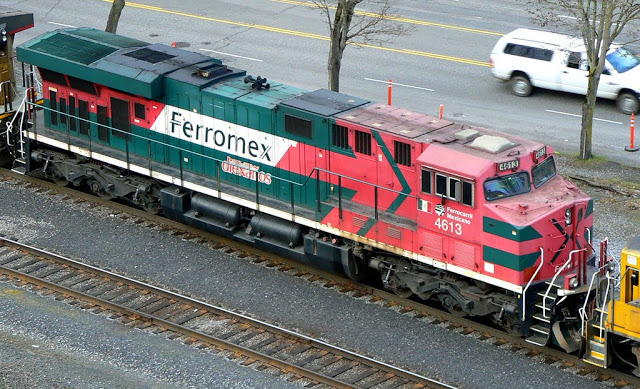 We are very short on power they are using whatever they can get their hands on.

Why is the BNSF short on power? Aren't their hundreds of locomotives still in storage? Has traffic come back that much that there is no power? I mean, I haven't seen lots of SD60Ms or SD40-2s or anything a little older that were mothballed when the economy fell apart, running around now. A few, but not in the numbers I'd expect if BNSF were power hungry.
A

I see Ferromex a lot on BNSF and some UP trains, Just yesterday I caught a solid Ferromex consist on a westbound BNSF grain empty, had 2 new SD70ACe's, with an ES44AC in the middle
E

Got to see a coal train headed to Roberts Bank last week. A Grinstein SD70MAC was on the point followed by a FXE Gevo. Blew my socks off only because I was literally on the border waiting in line at Blaine. Wished I had the camera ready to get a FXE unit rolling north into Deltaport.....I've seen plenty of Ferromex units here in Seattle, but that was the first time I ever saw one on a unit coal train bound for Canada.
R

I've seen them on the UP a couple times here in Chicago.

Here are a couple of captures from today.

Thanks to a Heads-Up from otlocal, I was able to catch the Barstow-Pasco this morning at Moody on the Oregon trunk. Then again later in the afternoon departing Maryhill, WA.

They've shown up on quite a few trains running through Belen, and I've even seen one or two make their way to Albuquerque (which isn't too unusual, as any available six-axle power is used on the Albuquerque-Belen locals, including power from trains terminating at Belen).
C