Wednesday morning I was surprised to see ICE/DME colors down in the Lima yard, I was driving over the Robb Ave bridge. I figured it was come CN owned SD40-2's that were passing through but I was surprised to see them coupling up to the cars for the CF&E. Sure was my lucky morning to have unusual power for the Y102! Once they were out moving I was able to see that they were actually GP40-2's now owned by HLCX. Since the SD40-2's they had last year were sent back it has been a good 8 months or more since I've caught a leaser on CSX. Traffic was light coming back from the CF&E since they never ran a LIFW monday, only cars back to CSX were the LIVW traffic. 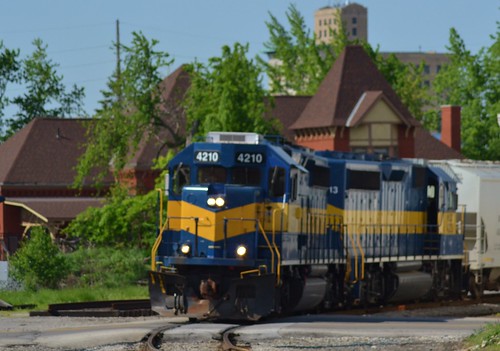 CSX Y102 Lima Ohio by alittlevanwerty, on Flickr
I know that shot was blurry, a lot of the pictures I took that morning were. Some dirt or hair in my wife's Nikon I think. At least this one was crisp, HLCX 4210 was unlisted on RR PICTURE ARCHIVES.NET so I needed a good shot to upload. 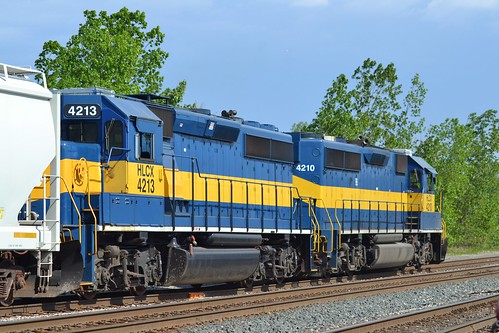 Also lucky for me, CSX commonly uses the same power for the Q559 in the afternoon that they used for the Y102 in the morning. They did and it was a chase! I made it to Lima in the afternoon just in time to miss them coming through the gates on Main St. I hoped to catch them in Cridersville but the engineer really notched it out so I had to get on I75 to get a lead. I made it to Wapak JUST in time to get them on the south end of town. Had I noticed right away they were going to do a meet here I would have taken more video. I quickly drove to the south end of the siding and waited, the north bound was already in sight. Didn't catch the symbol but it was an autorack with a lot of frames and mixed traffic at the end. Ring a bell for anyone?
After filming the Q559 we drove north spotting 3 more southbounds, a Herzog ballast train, an autorack and a Manifest.

Does anyone know who is the actual leasor of these locos? It would be great to see the colors more often!

the former ICE GP40-2's are on lease to CSX. There should be a total of 8 of these HLCX units on CSX. We've had a pair of them bouncing around the Louisville,KY area the past 2 weeks. The lease is due to a shortage of 4 axle power on CSX currently.

Originally there were 10 units in this group, but recently 2 were sold to the Copper Basin Railway. This was just prior to CSX leasing the remaining 8.

CSX 700 said:
the former ICE GP40-2's are on lease to CSX. There should be a total of 8 of these HLCX units on CSX. We've had a pair of them bouncing around the Louisville,KY area the past 2 weeks. The lease is due to a shortage of 4 axle power on CSX currently.

Originally there were 10 units in this group, but recently 2 were sold to the Copper Basin Railway. This was just prior to CSX leasing the remaining 8.

Would you happen to know if it is a long term or short term lease? Thanks for the info!

Those are nice looking units. I used to like to see Conrail's TOFC trains run across Indiana with GP40-2's in the lead.

Son of a Conrail fan

The rack train with the,mixed freight is Q272.
A

Thanks, I see it occasionally but haven't heard them on the scanner.
T