Cloudy With A Chance Of Orange

After planning to go for more than a month, I finally made my way to the South Carolina upstate to chase the Pickens Railway. The weather was kind of crappy, but the orange U-Boats of the PICK more than made up for it.

Here we find the Belton/Honea Path job parked just west of the Anderson St crossing in Belton, SC. The crew had stopped to grab coffee at a gas station across the street to the left. As with all of the PICK's locomotives, U18B #9507 was built in 1970 for Seaboard Coast Line and was later pressed into Maintenance of Way service by CSX. (Click on the photos for the larger image) 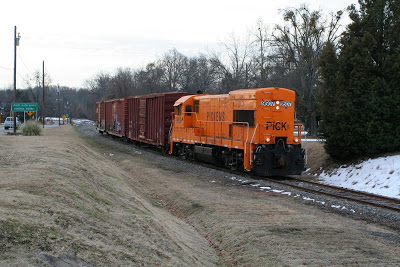 Crossing the Rocky River on the way into Anderson, SC. 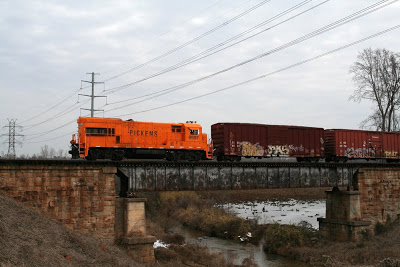 Getting ready to cross North Fant St in Anderson. 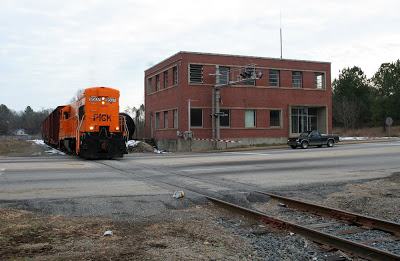 9507 from the Belton Job meets up with 9500 from the Gluck Job at the Norfolk Southern interchange near West Orr St. 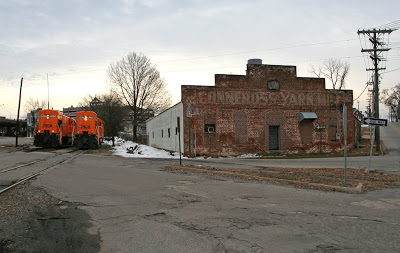 9507 moves cars about at the interchange while 9500 waits on the line heading down to Gluck, SC. 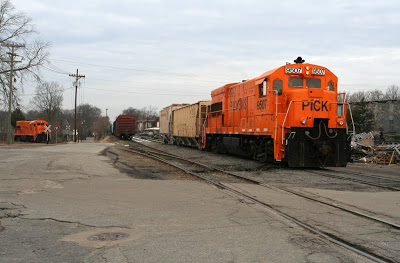 The Norfolk Southern local with four high-hood Geeps for power. Two GP50s in front and two GP38-2s trailing. It has just picked up cars from the PICK and is preparing to depart. The train is seen along Kates St on the Northwest end of the city. 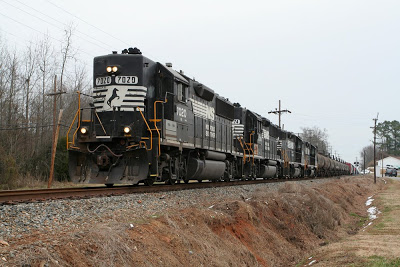 For more photos from the day as well as a video, please check out my blog. The video is not the greatest quality, but the sounds of the U-Boat and it's Leslie horns are awesome.

Wow, those really stand out Tommy. Thanks for sharing!

Awesome! I wish we had more short lines around here!

papio said:
Wow, those really stand out Tommy. Thanks for sharing!
Click to expand...


brad_in_omaha said:
Awesome! I wish we had more short lines around here!
Click to expand...


Thanks Brad. There are at least 6 (if I'm remembering right) shortlines here in South Carolina. I'm trying to work my way through them all before punching out of here in April.
W

Very nice set Tommy. Always been interested in making a trip down there, just haven't gotten around to it. And don't even get me started on the money I'd need to get down there!

Thanks Wyatt. I hear you on the money thing. If you ever do get a chance to head down this way though it's certainly worth it. Just in the upstate alone, there are three shortlines w/in 45 min of each other. Pickens Railway, Greenville & Western RR and the Carolina Piedmont RR.
A

Thank you Madame Not often I get to seem them out this way.

Thank you and welcome to RRF!

Nice! Is the Youtube code new on RRF? I have used it on other forums and its great. Way better then clicking!

It is. Bob just enabled it today.
B

I know I commented on this series on your Flickr page...love shortlines in small towns with interesting old buildings. The video...actually the audio...is a nice bonus! Well done.

bogray said:
I know I commented on this series on your Flickr page...love shortlines in small towns with interesting old buildings. The video...actually the audio...is a nice bonus! Well done.
Click to expand...

Thanks man. The audio was great. The video on the other hand... The first two weren't shaky, but the quality was low. In the last clip, the quality was much better, but there was a lot of shake going on from freehanding my iPhone and getting hungry. Within the next couple of years I plan on picking up a new camcorder. Of course, the 5D Mk II coming next week can do a little double duty in the meantime.