And Now, Some Frustration

My dad, who is not a railfan, once mentioned to me that train chasing is like hunting. When it works out, all is fabulous. But sometimes you aren't on your game, or the target is not cooperating, and things don't go your way.

On Saturday I decided to catch UP 2001 on ZSEMN after dark as an end of 2011 treat. After waiting at Kirkwood for a little while I finally seen the headlight illuminate the tracks. As the engines appeared, I noticed something strange, the 2001 was gone! What happened? Apparently UP took it off in Malta Bend (wherever that is). Better luck next time, I guess.

On Monday I received great news-UP 2001 was coming solo into St. Louis! The sun was out, and everything was great. The 1982 was also in town, going west in the morning. It will be gone before I get to the tracks, or so I thought.

After lunch, with the 2001 still about 40 miles out, I decided to scope out some areas around Gray Summit, where the lighting would be good. I missed an eastbound coal train, and since the 2001 was still a ways off, decided to catch it at the next town east-Pacific. Since the light wasn't good, I didn't really care what the shots were. After all, they were just record shots. For the DPU, I wanted to see what a shot would look like if I would catch the 2001 here, so that is why it is really bad. Here are those shots:

But then I made a terrible mistake. Seeing that the parallel BNSF signal was green, I decided to cross the tracks and wait for a few minutes and trace the 2001. Soon after the UP's gates went down, and I stepped out to take a video. I could see some colorful power, but I had no idea what it was. What is that thing? UP 1982!! What? That should be long gone, shouldn't it? Apparently not. Perfect lighting, but no photos! What an idiot I am. If I would have looked at the UP's signal, I would have stuck around. Oh well, it is gone now. Back to the 2001, I guess. We drove back to Gray Summit to try to catch the 2001. The phone trace still said that it was at Morrison Junction, about 30 miles west.

Pretty soon I could see some covered hoppers, and I realized that it might be the 2001. We gave chase to the train, and luckily it was the 2001. Since we couldn't catch it in Pacific, we decided to go to Eureka. In the short time, I managed to get set up in a spot that I thought would be good. Unfortunately, I made another mistake, and it didn't turn out well. Once again, oh well. Better luck next time, I guess. 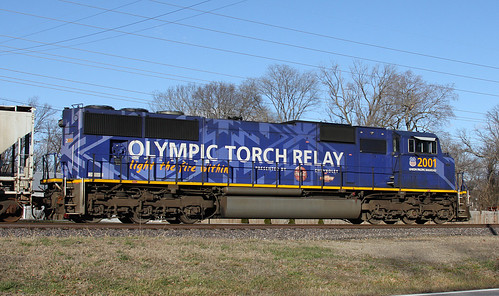 It is like hunting. Sometimes you bag a big one. Sometimes you wait, read a magazine, get a whiff of creosote and listen to the rail creak in the sun light.
S

You seem way too hard on yourself man. That's just my two cents. You always seem to get one of kind shots of locomotives even on "frustrating" days. And lets be honest, if it were really easy, it'd get boring really fast. Also, mishaps and chance encounters make for the best train chasing stories.

Which brings me to my question. Where are you getting all this awesome intel? Where locomotives will be, when they are leaving, just from a rail scanner?


Pat said:
It is like hunting. Sometimes you bag a big one. Sometimes you wait, read a magazine, get a whiff of creosote and listen to the rail creak in the sun light.
Click to expand...

Dang Pat, that was down right poetic. Good form! And it was an excellent setup for this:


Allan_Love_Jr said:
Or my case. Fall asleep.
Click to expand...

Very funny Allan. Made me laugh out loud.

Thanks guys! You are probably right: If I caught everything easily, it would not be fun. A little challenge never hurt!

As for the information on the heritage locomotives, I check into this group at yahoo: http://finance.groups.yahoo.com/group/heritagelocomotives/
Tons of members at Railroadforums are over there, as well as many other railfans. It is a great way to check on Union Pacific's special locomotives.

Allan_Love_Jr said:
Or my case. Fall asleep.
Click to expand...

Or like Me, be in the bathroom when something goes thru

Allan_Love_Jr said:
I'm serious. I do. That's what happens when one doesn't get enough sleep. Plus it also helps me when returning to home. You wouldn't to see me dead do ya. Falling asleep at the wheel is laughing matter.
Click to expand...