A Morning at West Scenic

I got an email from Martin Burwash that he was going up on the hill and wondered if I'd like to join him. I'd only been bugging the guy on and off for about 3 years so I wasn't about to pass it up.

Like a lot of us, I really like Martin's collection especially the ones that including a fairly lengthy hike as they aren't the same lazy Me-Too shots you see from the access roads. I was pretty excited and went to bed early Friday night as I was sure it would be a tough but gratifying day.

We met in Skykomish at 7 am and headed up to Scenic where there was fresh snow on the tress.

1. At East Scenic a empty grainer was waiting for two and we were as surprised as the crew to hear the first one would be Amtrak #7 which hadn't run for days because of the huge snowstorm in Montana. 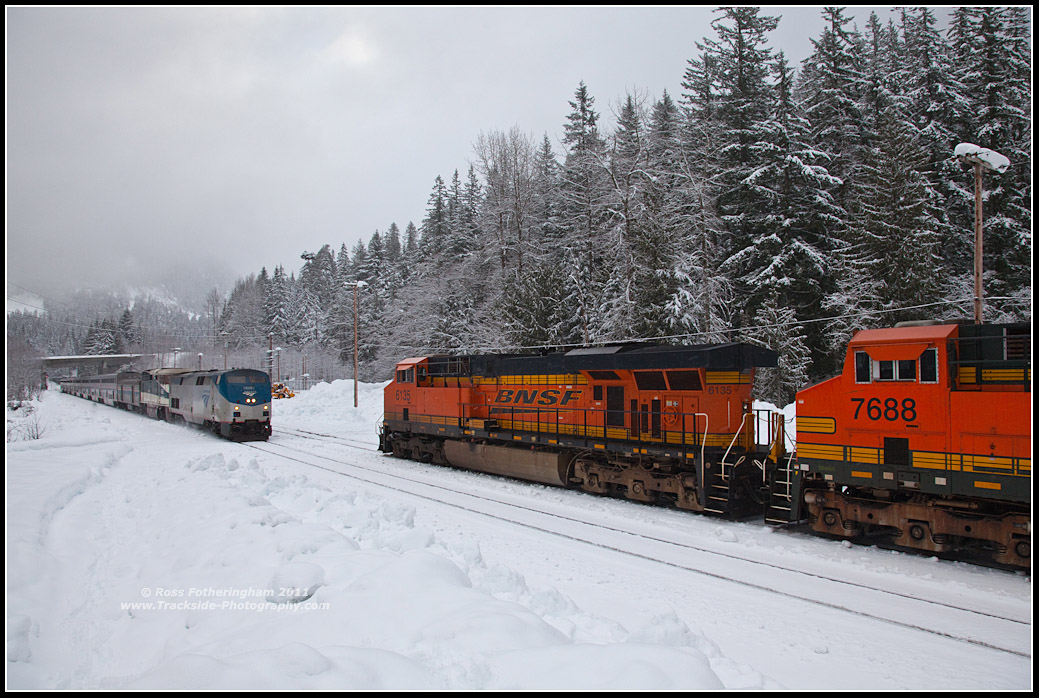 2. Right behind Amtrak was a stack train. So much for not getting Me-Too shots, but what else could we do but try and make the best of it? 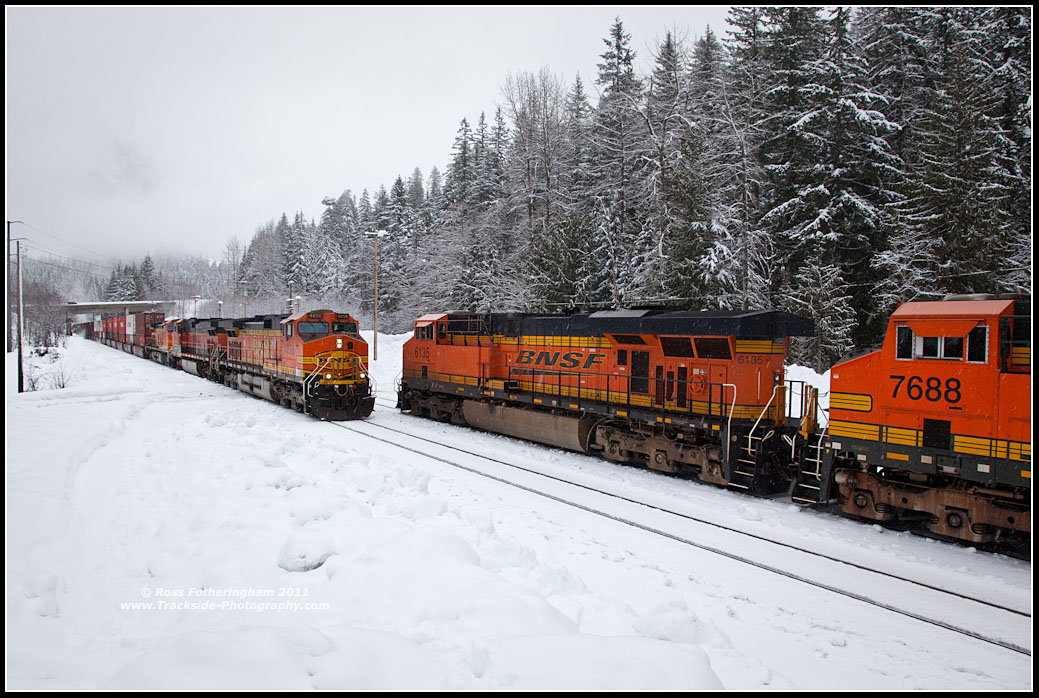 3. The head end of the empty grainer only had 2 locomotives on it which pretty much assured that it had a DPU on the back. Martin got set up to take a pic of the DPU and incorporate it with a Dash 9 which had been set out on the house track because of a bad wheel. 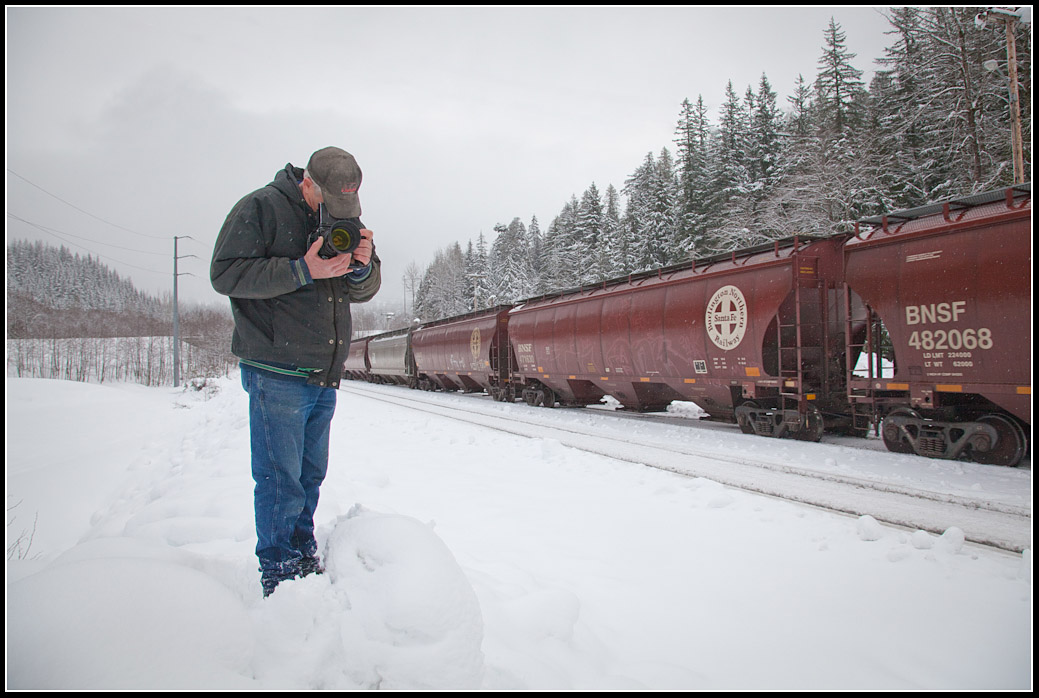 After the grainer departed we put our packs on and headed for West Scenic.

The hike down to West Scenic was a lot harder than I thought. Following Martin we traveled old-school and just walked near the ROW. Even though the area had been plowed recently your foot still sunk to about your ankle and about every 3rd or 4th step you'd sink to about mid-shin which made it really tough. The pace was brisk and since you couldn't anticipate which time the snow wasn't going to support your boots I had to use a lot of extra energy being prepared with each step.

Martin kept it interesting along the way pointing out different historical locations and old roads and ROW I hadn't noticed before. Then across the valley showing where the GN set up the sleds to lower people and bodies down from the upper part of the line to the lower after the Wellington Avalanche.

4. Once at West Scenic I was able to remote into my home computer with my phone and look at ATCS Monitor so I knew we had 2 more eastbound trains coming our way - one at Sky and the other at Baring. The scanner told us the first was another empty grain train. Here is the second train, a eastbound Z. 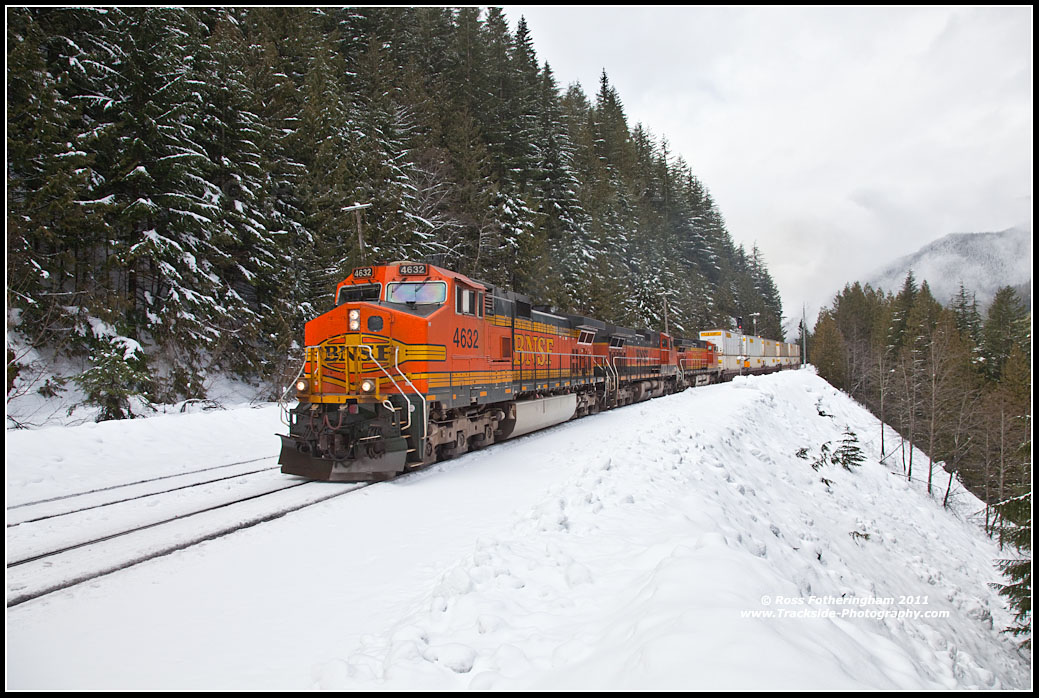 5. On the way back Martin's eye caught this scene so I snapped a picture as he checked that the location was safe. Don't let his gray hair fool you, I struggled to keep up with this guy and consider myself to be in decent shape. I'm use to breaking trail, but I must admit, I was relieved on the way back that when I asked if I could break trail for a bit he looked back as if I was joking. You'd think this guy worked at a feed mill by day and farmed at night....... 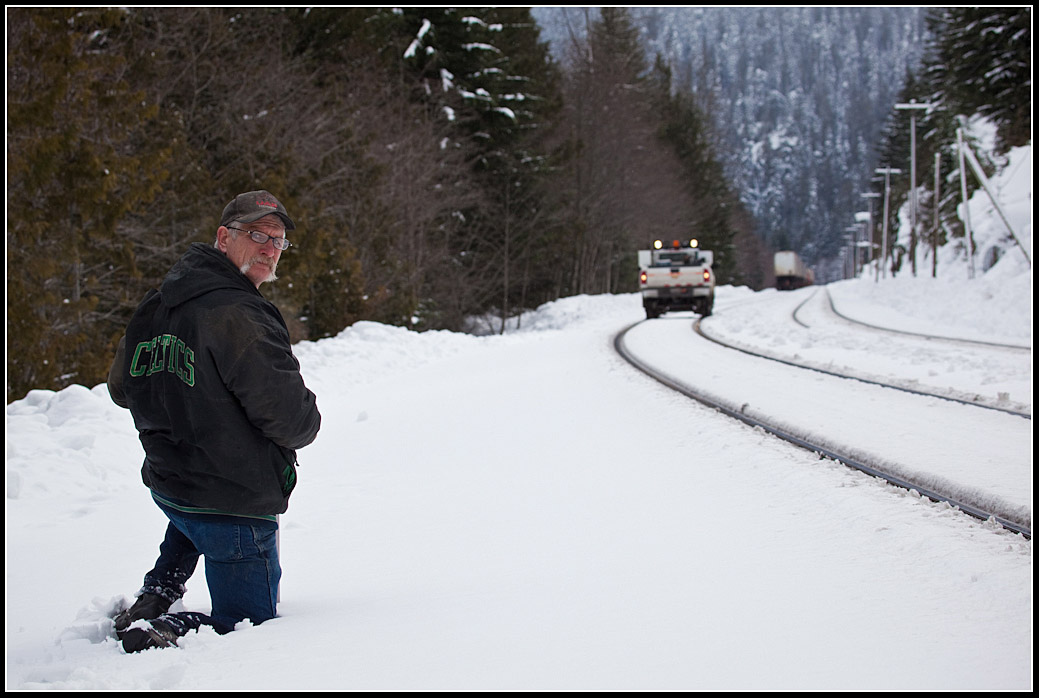 You really need to find a better quality of friend, Ross. That old geezer's a has been hack....

Snow was blowing off the boxes as the train went by.

Once clear, the Pettibone made a few more passes before the eastbound got the green.
M

Arriving down at West Scenic, I set up on the ledge side of the tracks for the next empty grain and DPU.

We switched sides for the eastbound Z, and boy am I glad I did, as the trailers went by on the main, the Kershaw plow showed up working down the siding with the track inspector hot on the Z's tail
M

Hiking back up from West Scenic, we encountered the Kershaw making another pass.

Ross stayed behind to get some more video of the plow, I trudged on up to East Scenic to check out progress on the disabled unit. When I got there, the plow had finished clearing out around the unit and began working down the mainline.

The boys from mechanical had arrived by then as did an engine crew, so they fired her up in hopes of getting back online.

A lot of poking around was done, isolating traction motors, and any number of technical conversations, but all for not. The unit would eventually have to be towed to Interbay.

So that's if from the old guy....a really fun day!

Nice shots guys! It looks like all of the hiking into those locations really paid off.

Yeah you lucked out for that shot of the dozer with the Z next to it. I almost didn't get my camera out in time to catch dozer on the siding. Those MOW guys sure made for an eventful day with all those passes. 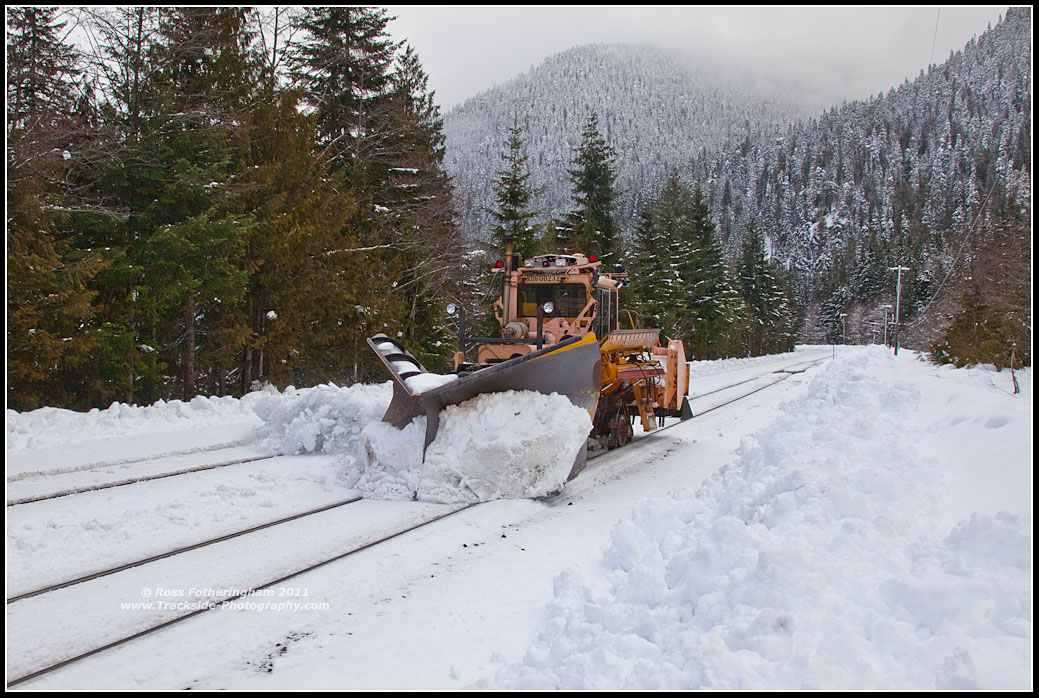 Here is a link to the video I took that day.

Thanks for the video, Ross, that was fun!

What camera do you use? The audio was excellent.

Hey thanks, the video camera is a Canon HF M31 and I use that with the Canon DM-100 directional mic.
B

I was trying to figure out how you were doing the stereo effect!!! Man, that's great.
M

Problem is, I have to remember not to sit there cussing up a storm because I blew yet another shot while Ross is recording....

Joel Hawthron helped me speck the camera and external microphone. After seeing this video I really wanted to have the same setup. After that opening scene go to 7:10 and listen to the crackling of the high voltage wire and the singing of the rails - you'll know for sure if you have your earphones on the correct ear.

Looks like it was a fun day. Would love to have been there. Gimme a call sometime if you are heading out and want company Martin. Have not seen you for years man.
Hope all are well. Say hi to Janice. Ross. Stay in touch. Seriously, enjoyed the pix.
Will

'Lazy - Me Too shots' - well I guess I know where I stand. You know Ross maybe you'd better watch what you say.
M

Aaah don't fret, Jon...Ross has been hanging around me too much. My crusty nature is rubbing off.

Will! The son I'm glad I never had! Seriously, for sure, long time no see. Sadly, photog season is over for me...but I'll give you a ring next winter when I decide to head back up. Going to Montana in May, but no railfanning, Seth is got his Master's so going over for the ceremony.

Ya' gettin 'sensitive' in my old age. I don't mind 'me too' - it's the 'lazy' that pissed me off. Oh well. The real sissies are those of us who only railfan with the temp is above freezing. You make us all look wimpy. Anyhow, I forgive your son that you never had for his insensitive blather. I'll take you up on your invitation - Ross can come too. Thanks. Congrats to Seth - that's a big achievement!

Jon Bentz said:
'Lazy - Me Too shots' - well I guess I know where I stand. You know Ross maybe you'd better watch what you say.
Click to expand...

Hey sorry Jon I wasn't meaning to offend anyone especially someone I respect, and your right.